The Southern District incorporates the Denver Design District @ Broadway Park and comprises 250,000sf in 38 unique, upscale design showrooms together with 13 planned redevelopment sites within the overall Broadway Park Masterplan. Of these, 7 sites are already committed for development via sale and/or JV with vertical development partners, 2 reserved for D4 developments, and the balance being existing buildings with established tenants, notably Quest Diagnostics and Karsh Hagan.

Office, retail, hotel and residential options, with new access roads, significant open space in various park configurations that correspond with the approved General Development Plan from 2009 (currently being updated via an Infrastructure Masterplan Process with the City of Denver).

Parcel 12 & 17: UNDER CONTRACT and respectively comprising a 1.16 acre site for apartments/retail under the C-MX-16 zoning and 125.9” Wash Park Height Plain, in combination with a 1.28 acre, C-MS-5 zoning, and also committed for apartments/retail, these sites together straddle the southern- and northern- Broadway Park Metropolitan Districts.
Parcels 13A-D and 14C-D: UNDER EXCLUSIVE LOI FOR SALE/JV for a proposed urban office/hotel/retail collection of buildings and parks.
Parcel 14E: AVAILABLE 0.62 acre site at the southern end of the district and adjacent to Rail Line Park and the I-25 and suitable for a hotel or office development under C-MX-16 zoning and the 125.9” Wash Park Height Plain.
Parcel 16: AVAILABLE 0.77 acre site zoned C-MX-8 and within the 125.9” Wash Park Height Plain suitable for mixed use development of offices, retail, and/or residential.

Additionally, and significantly, a major regional infrastructure upgrade between the City/CDOT is underway and is known as the I-25 “Wedge Ramp” Project that is scheduled to be constructed from 2023-2025 and will provide a new multi-modal connection to Broadway Station as well as a new southbound vehicular on-ramp to the I-25 from the southbound Broadway arterial from Downtown Denver.

The Southern District @ Broadway Park, is the land fronting Center Avenue and South Broadway, between the I-25 and the Consolidated Main Line rail corridor with visibility to ~300,000 vehicles passing per day, plus a short walk to RTD’s Broadway light rail station under the I-25 viaduct. 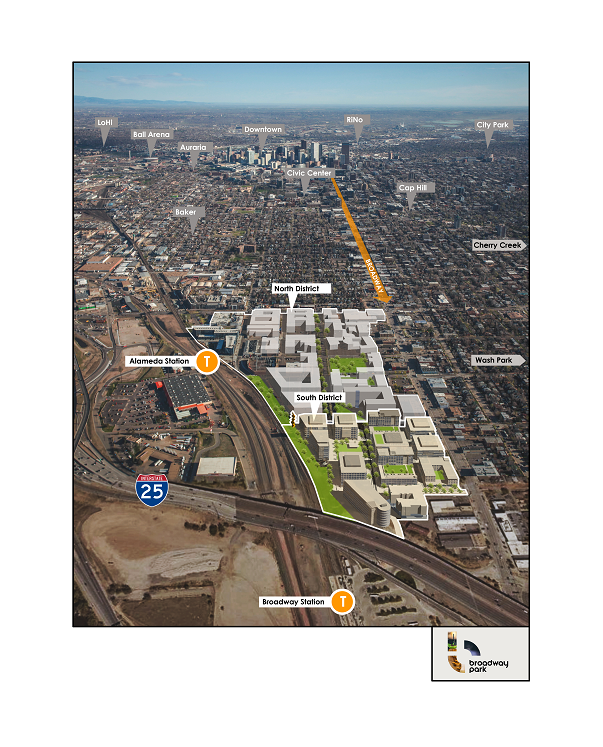